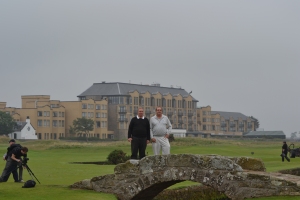 It’s always awesome to walk in ancient places, where people, way back when life was more natural, picked as their nesting grounds.  I mean, St. Andrews is mostly cold, often windy, rainy, full of hale and rain…brisk even on a sunny day in August.  So what was it about this place that made people huddle together, albeit in small numbers?

I mean before the golf course.

Was it the fair maidens?

Stone and or Freemasons?

But, at least for us moderns, the site of sports cars:

and future tales to tell to inspire our children to make the trek, golf or no golf.

Some shephard somewhere, with spare time, due probably to great dogs, thought up golf.  I mean this was a man with spare time and land to boot.  18 holes?  go figure.

No other sport offers a completely different day each and every time you play.  Even if you play the same course, golf is a new experience, usually frustrating, sometimes amazing, and surely never ending in that you can always do better than you did.  The satisfaction comes from a spiritual level of connection: to the land, to your friends, to the zen it takes to play well, to the luck of being outdoors in the electronic age.

Its not fair that everyone doesn’t get a chance to blow 4-8 hours a week outdoors doing what they want.  Such a great deal of luck to be able to get away once in a while.

Some recently arrived refugees play soccer in Italy. But how many refugees will there be due to the golfers who took power and ran with it?  Such a wonderful activity, but its got all the stink of upper class domineering attached by now.  Hmmm. An enigma.   Maybe it’s time to hang up the clubs and go far a sail, or a swim, or to volunteer.